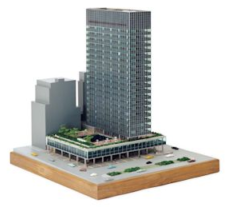 The Architectural Models of Theodore Conrad

In her new book The Architectural Models of Theodore Conrad, historian and curator Teresa Fankhänel offers an alternative history of American modern architecture, highlighting the often-overlooked influence of architectural models and their makers. Fankhänel focuses on the work of Theodore Conrad (1910-1994), the most prominent and prolific American architectural model-maker of the 20th century, whose innovative work was instrumental in the design and realization of many icons of American Modernism, from the Rockefeller Center to Lever House and the Seagram Building. Conrad revolutionized the production of architectural models and became an entrepreneur. Fankhänel's research is based on the recent discovery of his fully-preserved private archive-models, photos, letters, business files, and drawings.

In praise of her book, Barry Bergdoll writes: "Fankhänel pulls back the curtain in the theater of American modernist architecture to reveal the behind the scenes contributions of the star performer of a novel career path: the professional model maker. Theodore Conrad not only made models, he helped make careers with miniatures that could win over clients, dazzle exhibition goers, and sit for camera portraits that would travel the world in newspaper and magazine illustrations. A glimpse behind the scenes offers a whole new vantage point on the culture of mid-20th century architecture at nearly every scale.”

Teresa Fankhänel is a curator at the Architekturmuseum der TUM in Munich, Germany.